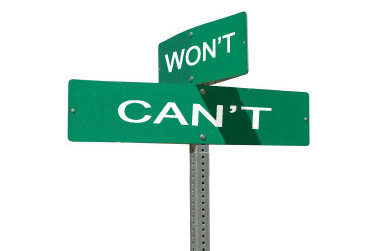 Q. What should you do, being a manager, when Charlie tells you or makes you feel that he doesn’t want to do what you’ve asked?

A. First, satisfy yourself that he can do it, that he has the skill and capability.  If not, address that with practical help, training and support.

But if that’s not the problem, consider this:

You must decide which of these objections you’ve got in front of you, because you need to deal with each in completely different ways.  And it isn’t always that easy to tell which of the three is being presented.  You need to listen carefully to what is being said to you in order to decide.

Once you’ve decided, what’s the best approach to tackling each objection?

But it doesn’t work.  It’s like telling a child not to be scared of a wasp in the room.  There are good logical reasons not to be scared.  We are often in a room with a wasp but it only rarely stings us; the wasp’s strategy isn’t to sting, it is to escape; and even if the worst happens and we get stung, it will only hurt for a few minutes and we have soothing ointments to hand anyway.  All these things are true, but none of them stops a child being anxious about the wasp.

Worse than being ineffective, our logical reassurance is actually an *opposition* to the child; it is working to deny the child the validity and adequacy of his/her feelings of anxiety.

It is more effective to say to this child: “I understand and share your anxiety about the wasp.  I too hate the idea of being stung by a wasp.  Given that the wasp is here, let’s think together about why we are so uneasy about it, and see if we can come up with some assessment of the likelihood of being stung, and what we might do to reduce that likelihood.”

Well – I might not use those exact words to a child, or not a small one, anyway.  But use my words and substitute the “wasp” language for the language of the problem at work, and you will see how this approach will take us into a valuable discussion with Charlie that leads to a constructive outcome – rather than just waving the problem away.

“You’re right, Charlie.  This is a delicate and challenging task.  I can see it’s daunting and I would dislike the idea of failing at it.  Shall we spend a couple of minutes thinking about why this is so difficult, see if we can work out the likely ways this plays out, and think about what we could do to maximise our chances of success?”

I don’t claim that my words are perfect for every occasion.  But they’re way better than: “OF COURSE YOU CAN DO IT MATE!!  DON’T WORRY!!  OFF YOU GO!!!”

ACCEPT the anxiety instead, and then you have something to work on.